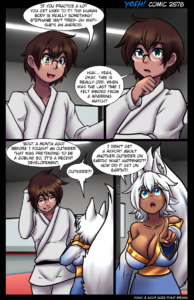 So! I’m pretty sure the first panels is a joke. I know, “Didn’t you write the comic? Shouldn’t you know for sure if it is or isn’t?” Some characters have a life of their own in my head. I’m sure it’s a joke- I just don’t know if it started as one. I can totally hear him saying “If you practice a lot you get used to it-” only to realize- well- while that is true that’s pretty incredible- actually- really didn’t think about it- and as he’s interpreting it he jokes comparing himself to an android. Jokes like he forgot that- and then seriously addresses when he thinks it started.