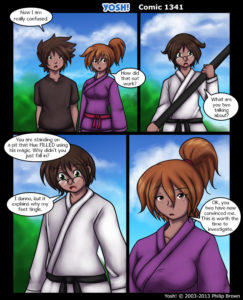 So Stephanie got Hue to set up an area for Phil to fight on his terms- but it seems for some reason it’s already failed to work. But why? Wouldn’t it revert to it’s original state or move?
Alright! Finishing up a lot of the art for the book, other artists are finishing up their submissions or have already sent them to me, time for some more information! Please check for the new poll going up and please vote in it only once. What I need is a count of those who are planning to pre-order. As I explained before, pre-orders are going to be used to order all those ordered and the “profits” are used to just buy more books to be sold online to those who can’t preorder- and to be sold at cons. According to the current poll, more people want to buy the book without preordering than I can afford from the preorders. Basically- that means if everyone who says they are going to pre-order does- not everyone who wants to buy the book later will be able to. I just won’t be able to afford that many. If the numbers from the new poll are about the same, some people will not be able to get the book at all. I hope that is not the case! Later I will have a mockup of what the book will look like and maybe a few previews. I will definitely take pictures of the book when I get the sample one later next month- or early July!