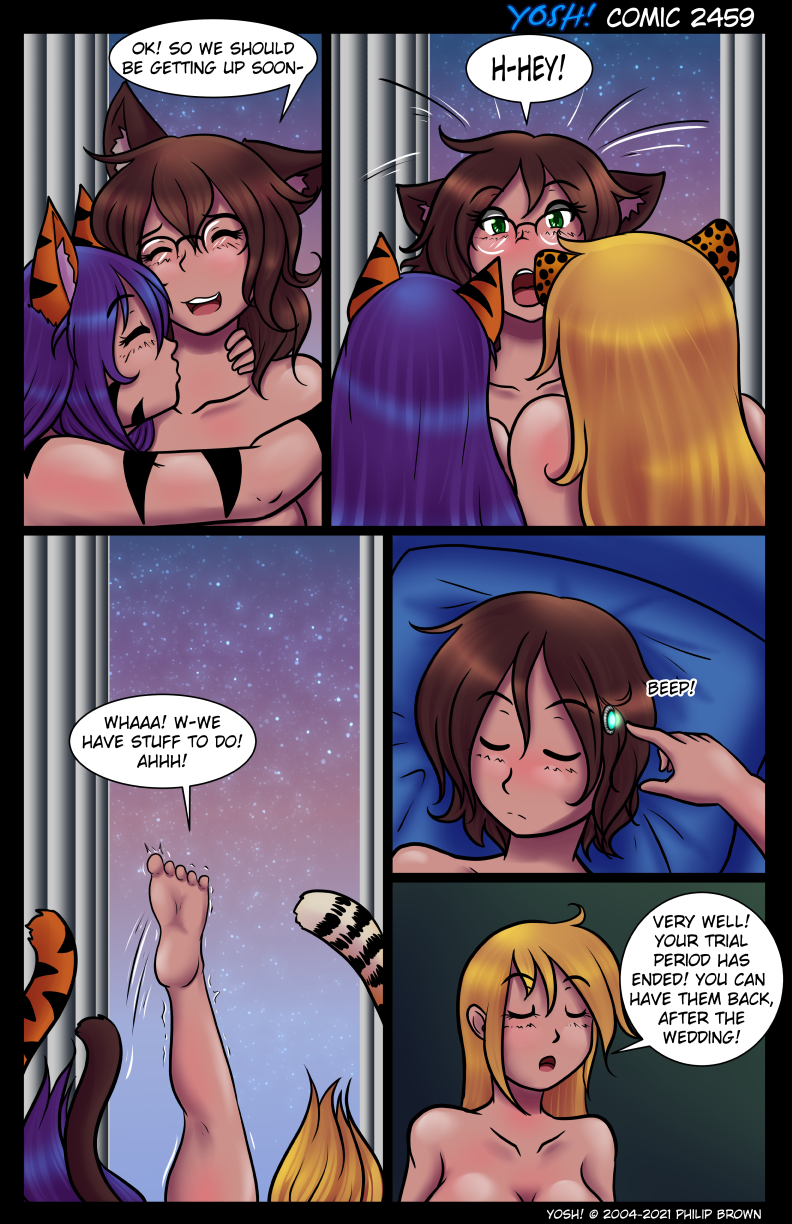 Is it possible to become a Philophile?

Are they just that much more into catgirl!Phil, messing because it is VR, or is this a morning ritual they go through more often but was just not shown?

Catgirls are catgirls. (And Phil is a fast adapter sometimes.)

Makes me wonder with how comfortable Phil is being a catgirl if he’s actually trans and hasn’t realized it yet.

Also, I hope there’s a way to log yourself out of that system.

Probably shouldn’t assume he’s Trans from that, if you want to give him a label like that, non-binary would make more sense as he clearly doesn’t have an issue with being male or female.

Fair enough there, although technically non-binary is under the Trans umbrella.

I feel sorry for Kate sometimes. Every beautiful woman deserves a man who wants her physically as much as mentally and emotionally. Phil comes across as dead from the waist down.

People don’t need to be aggressively sexual to be sexual. I’ve said it from time to time, some people assume that Phil and Kate have had a sexless relationship – I never said that was true. I’ve never said they were “saving themselves for marriage” or anything like that. I have had Phil and Kate both say they are both ok with an open relationship. Due to the general rating of Yosh though- I will never draw them in the comic actually having sex. It was important for Nami and Blue, it’s not so for Phil and Kate, they have been sleeping together for years now and they don’t openly discuss their sex life. If people have a problem with that, then those people have a problem, not Phil and Kate.

I understand what you’re saying, but the way it comes across in the comic is that Phil has essentially no sex drive at all. I’m not asking for explicit scenes or graphic detail in conversations. One of the things I really like about Yosh is that it stays overall family friendly.

What gives the impression that he has no sex drive is actually stuff like what happens in panel 3 of this page. I can’t think of anyone, man or woman, who would be in this situation and be more concerned with what needs to be done that day. After an hour or more, sure, but at the start of it? That reads like the person has no libido at all. Apologies if I sound like I’m bashing on the comic or you, Sage. I’m really not. Just airing my thoughts.

I didn’t say gender fluid because from my understanding people who are gender fluid shift from feeling like one gender to another, this shift might not be a thing they will to happen but rather just how they feel at the time. If that’s true, non-binary works for someone who doesn’t care about their gender as it doesnt matter much to them- is that right?

That is (mostly) correct. Nonbinary people are people who don’t fit neatly as male or female, while agender would specifically be someone with no gender (but falls under the nonbinary umbrella). Were in the non-binary umbrella Phil is depends entirely on him; if he just feels a bit of both, or neither, or just doesn’t care.

Genderfluid, on the other hand, is people who don’t have a readily fixed gender; it might change day to day, or during the day, frequently, or sometimes only once in a while. This can also include being non-binary sometimes, and male/female other times.

Gender is a social construct you choose, and it feels like racism to me when trying to affix labels on other individuals. If they want them, they chose them and tell us.

On a population level, sure, we need the biological labels for medicine if nothing else (and the social labels would correlate with some medical outcomes as well).

I.e. right now I think the “it’s no other’s business than mine” attitude of Phil and Kate is exactly right. If it comes up during medical visits and statistical polls, it will be privacy protected data.

Don’t ask, don’t tell, don’t care. People shouldn’t be pigeonholed by gender, skin color or apparent species anyway. Don’t be surprised if people don’t act according to your prejudices. If Phil wants to be a catgirl with big bewbs, let him. If he wants to be double-teamed by two sexy naked women, let him. Go find your own catgirls and enjoy the tails.