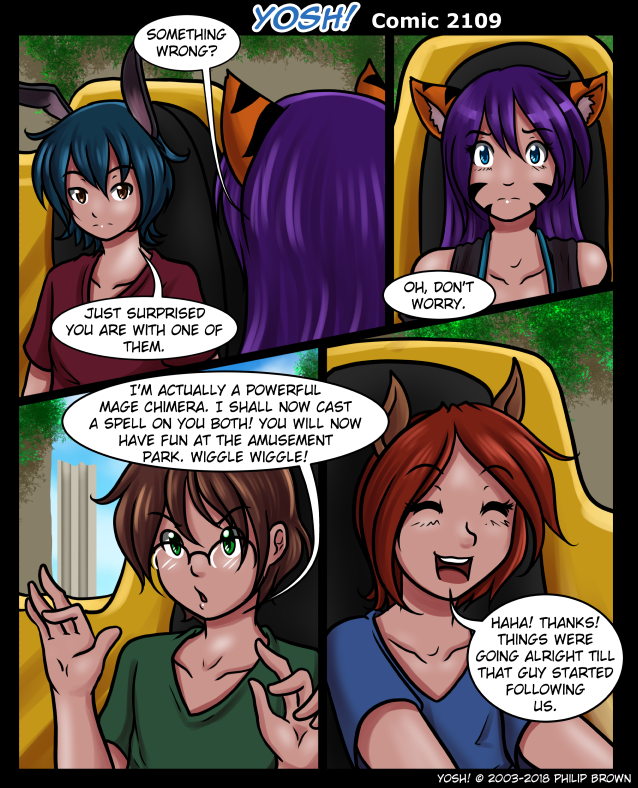 Well, that’s one way to break the ice Phil, Nice!

“Just surprised you are with one of them.” Okay that sentence is going to make the ride awkward. Phil is not one of them and I hope that guy was meaning normal humans. I also hope Kate’s shadow can behave otherwise that guy is going to have a bad time.

He’s the Null, which is probably the rarest of a the “chimeras”. He even beats out the Saint, and the Vile as there is only person at a time with his powers while the rest tend to have it in the family to a lesser extent.

Phil is that kinda dork who is either hilarious or adorable

And sometimes both at the same time.

Excuse me, did they just say that guy was following them? That’s not good!
And excuse me, did that one with the rabbit ears actually just call Phil “one of them,” straight to Kate’s face? That is ALSO not good!
Aside from that, well done Phil!

I’m pretty sure they’re donkey ears. So he may be a bit of an ass, so don’t hold it against him.

Ha, I told Mihari last night when I finished the comic someone would say that. However, he is actually a bunny boy, not a Donkey. 😛

Young with a lot of bad experience with racist jerks,

Given what we know of the powers of the Null you could even argue that Phil is telling the truth about being a powerful mage.

I wonder if that guy is drunk and/or stupid enough to.be goadee into making a scene in front of park security.

The Best counter against Bigotry of any kind? Humor. Nothing is so satisfying when seeing someone (anyone, that includes the kid with the long ears) spouting hateful nonsense of any kind being thwarted in their efforts by someone who responds by chuckling; the look of impotent rage on their face is hilarious.
Granted, this occasionally has resulted in a few of those idiots taking a swipe at me and sometimes connecting, but I’ve learned to literally as well as metaphorically roll with the punches. Besides, 99% of them couldn’t throw a punch to save their lives; rarely ended up with anything worse than a bruise. And that makes the look on their face even more hilarious. 🙂

Will these two have names?

Something seems… Different about the art now. Like the lines seem crisper around the eyes, the faces seem a bit more structured, the colors seem brighter…. Looking back, this has been a gradual change but it’s been happening for less than ten pages? Are you trying some new techniques? I do like it, by the way.