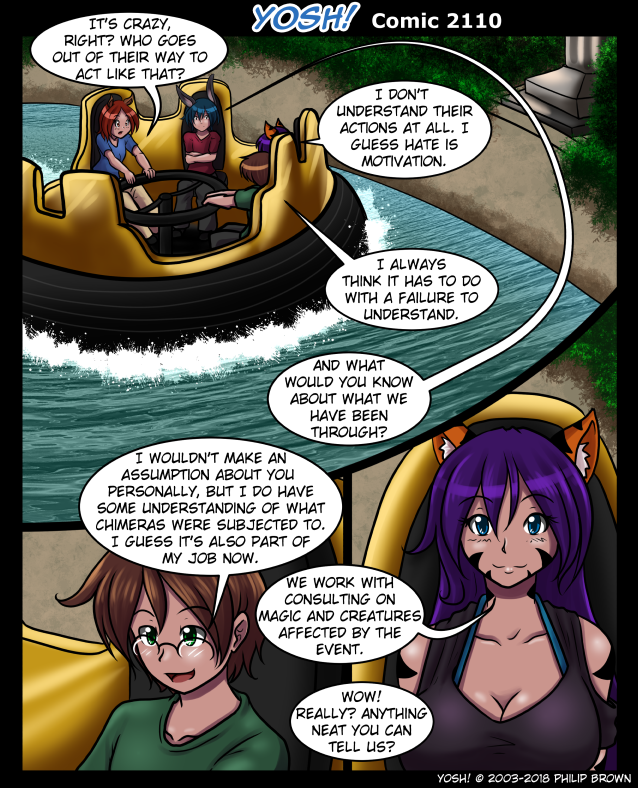 This is not the kind of conversation a group of strangers should have on a water ride! . . . Wait- What IS the kind of conversation to have on a water ride? Dear God, I’ve been out of society for so long I don’t know how to converse with real people! Only drawn characterizations of people! Speaking of- Don’t forget to check out Artificial Incident over at ai.katboxad.net!

How about “a conversation ABOUT the water ride”?

If the conversation doesn’t finish in time, on to anotehr ride !

“what would you know about what we have been through?”
She says to the human who has super rare magical powers, is sitting right next to his CLEARLY fuzzy fiance, lived with a demon as a roommate, is surrounded by cyborgs, machines,and mad scientists, recently punched a freaking Lich in the face, and also lives right around about six more fellow chimera, one of whom shares the place with him and his fiancee?
Hes also a gamer geek if that helps.
Phil is like the one human around who knows WAY too well the struggle that chimera, demons, Succubi, and androids go throught.

No thats the Bunny boy talking

honest question does Phil count as human?
i mean mages aren’t human because they can use magic so shouldn’t phil not cout either?

The problem with your question is that you first have to answer “What IS a human?” There’s a bunch of different ways to define it.
From a biological standpoint, while chimera do possess physical traits that the classical “human” does not, to my knowledge Sage hasn’t given any indication that there is a genetic difference between humans and chimera. If the fillers are any indication, the two can certainly have children together (though whether or not those children are themselves capable of having children isn’t known). Given the otherwise extreme similarities, and the fact that all “first generation” chimera were previously human, one could possibly consider humans and chimera as sub-species. Or there could be no functional difference, in the same way there is no functional genetic difference between people with different skin colours.
From a philosophical standpoint, there’s no difference. By all indications (and this seems to be kind of the point of the comic), Kate, Blue, and every other chimera we’ve seen are every bit as sentient, self-aware, and intelligent as any human we’ve come across. And why wouldn’t they be, they were born human before they were chimera. These tend to be the standards we use to seperate ourselves from, for example, a cow. So by those standards, chimeras are very much human. In fact, insofar as I’m aware, both Kate and Blue view themselves both as chimera and human, “chimera” just being a label to describe their collection of physical traits.
From a legal standpoint, that’s kind of a tricky one, and is still one of the sub-plots of the comic. To the best of my knowledge, in terms of the rights they possess, the simplied definition for chimera is “maybe human, maybe not, but if not, then equivalent to”. Which, sadly, is not the same thing as just saying “yeah, they’re human”.
As for mages, generally in fantasy and urban fantasy that feature multiple sentient races, a human who can use magic and a human who can’t use magic are both still considered to be human. So I guess, I’m not really sure where you’re getting the “mages aren’t human” idea?”

There tends to not be conversation. Only screams.

why does it feel like this conversation is gear toward you need security clearance to know what it about to be said?

Wait, they live in Virginia, and the biggest theme park in the area is Busch Gardens, in Williamsburg. This has to be the Roman Rapids 😀 One of the only two rides in the park I enjoy (Not a fan of rollercoasters)