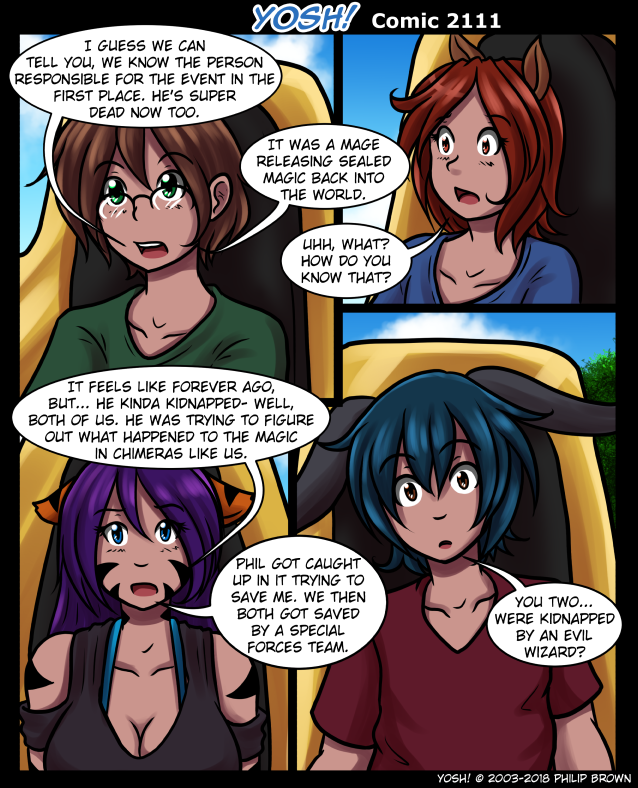 Kate” yes that’s a thing that happens'”
Phil “to us”

To be fair Kate has only been kidnapped by evil wizards twice. The first time Phil was a collateral kidnap. The second, Phil was a knight in frilly drag.

I think that you have the speakers in your comment reversed.

I forget was the dude who released magic the one who resurrected his sister as a robo chimera or was that the dude who killed him for his position?

Neither, although the people you are describing are the same person.
The guy who (tried) to resurrect his sister (Cain) was working with the guy who released magic (Serena’s predecessor as the Fire Magi). Cain was then named the new Fire Magi, but this was in name only because he didn’t actually have any magic himself. During that time Cain was using the unconcious/half-dead Fire Magi as a sort of magic battery. After Axel separated Fire (the elemental spirit) from the Fire Magi (and waking him up in the process), Cain killed him because A. He wasn’t useful anymore, and B. Cain’s is not exactly completely sane.

ah I see what you mean I screwed up my explanation it was suppose to be reversed the sort of anyway the guy who released magic was the former Fire Magi he was killed by Cain said dude who resurrected his sister as a robo-chimera thingy for his position so he could try and use the powers of the Magi to try and resurrect his sister right?

Yep. And now Cain makes magic robots for the Twins. He’s basically their version of Shiden, only more crazy and not as good.

I forget didn’t a black ops team take down earlier versions his robots or was that Shiden’s team?