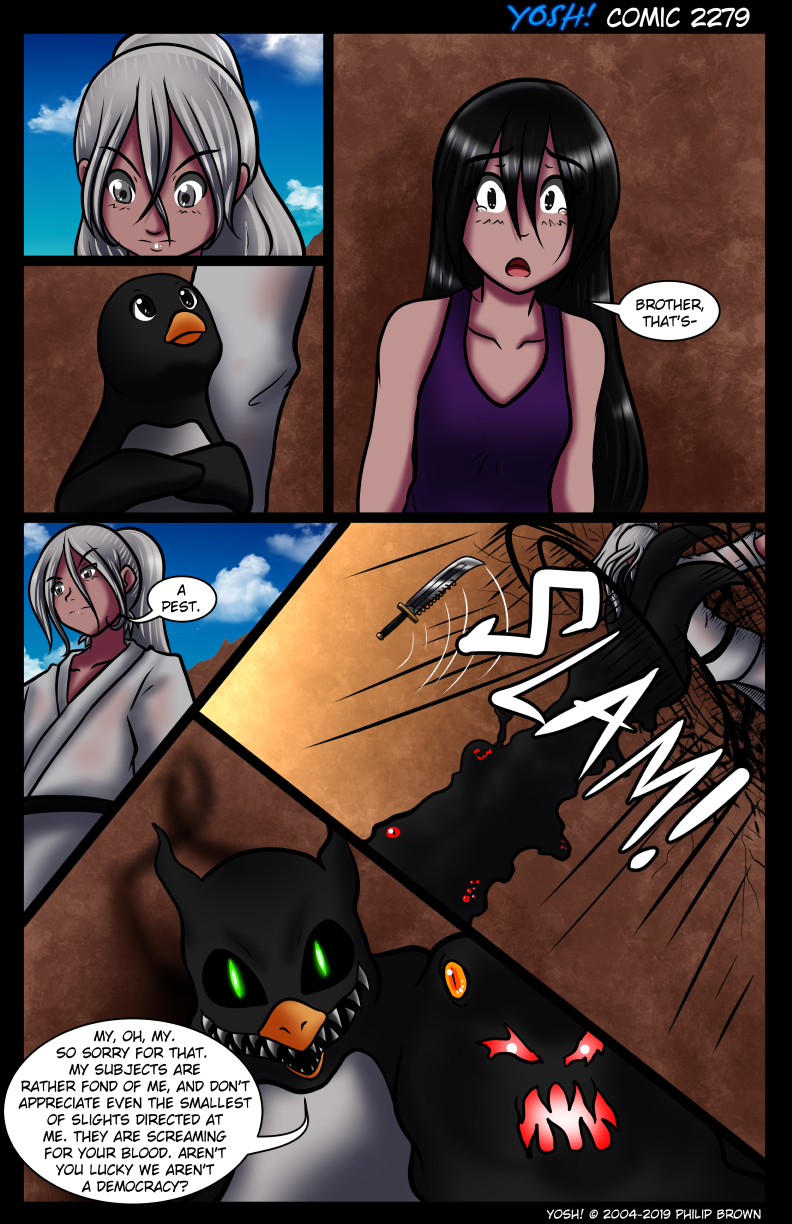 no survival instinct in this one at all

It seems kind of ironic given that he’s the physical embodiment of life itself.

….. For an ancient top tier elemental, life bloody sucks at paying attention. ‘Eck he sucks at that for a rank 1.

His issue isn’t that he isn’t paying attention. Its that he is arrogant enough to not let the complete thoughts out.

The real issue is that he keeps rolling Nat 1’s on active Perception checks.

We have the Harem MC levels of dense and then we have Life. You’d think after underestimating Kate and with the Null right there he’d be a little more wary.

On the one hand, it’s probably very unlikely that Life could’ve known Penpen was carrying passengers.

On the other hand, when a strange looking creature appears in the middle of a fight, and you don’t know how it got there, it’s kind of your own fault if you underestimate it and get your butt whooped.

I think that might be the creepiest that Penpen ever looked, it really shows he’s not actually as cute and innocent as the penguin form might suggest.

You do remember the eyes right? His solid black eyes that he then turned neon green. Or the fight he had with the other prince that used a berserker gauntlet? Or when he told kate and phil a alternate name of his.

I remember when he first showed his human form and the black and neon green eyes, and the fights with the other princes, not sure about the name thing, and I also thought of when he pretended to make a deal with Death. I still think the current page is the creepiest he’s looked so far.

you mean penpen’s cousin who if I remember right possessed Axel and was also used in a ritual by some stupid kids for powers or something that demon right?

No, the demoness killed that demon with Penpen’s bow and arrow.

The berserk demon was one of the three demon princes who fought the Magi on Earth, and was suffocated in a room on the Magi island until Hue opened it. For that fight, Penpen turned into a dragon and a humanoid monster with a crown of horns. https://www.yoshsaga.com/comic/victory/

I kind of expected this. Last comic I made a comment about how it’d be nice to see Penpen do something truly impressive and creepy. The response was “ok”.

I don’t know I think it could be creepier

Well he didn’t trip Life but he Pen Pen did plant his face, just in the ceiling instead! Think I’ll second LordViking that that is the creepiest we’ve ever seen Pen Pen too!

At least this time he didn’t get wet.

Yes, Life is lucky the demon realm isn’t a democracy.

What was Death about to say? How did Life not realize that the guy with arms crossed and clearly backing him up was ally? Was he just stupid enough to insult his allies for no reason? (I suppose it’s in character for him so far) I’ll never know!

Life only arrived at the battle recently, and has shown in the past that he doesn’t much approve of his sister exerting herself. So it’s quite possible he doesn’t know anything about Penpen. If that’s the case, all he’s seeing is a small, albeit unusual animal. And things really haven’t been going his way for the past few minutes, so he has very little patience for such things right now.

I suppose it’s possible his powers could give him more of an indication of what Penpen is, but in that same vein Penpen would probably take measures to counter that in order to maintain the element of surprise.

Also, Life is every bit as arrogant as his sister was, and hasn’t been knocked down as many pegs as her yet. “Ally” is synonymous with “minion” to him.

Pretty sure PenPen isn’t an ally to Life and Death. He’s already friends with Phil and the gang, we saw him help Axel, and he arranged for Kate to be protected from Death.

But he did that while supposedly taking orders from them.

She was probably about to tell Life that Penpen was a demon. Afterall they have met, albiet seperated. May recall when they were talking through the demon portal with each other.

And Axle hasn’t even been noticed yet or made his move yet either.