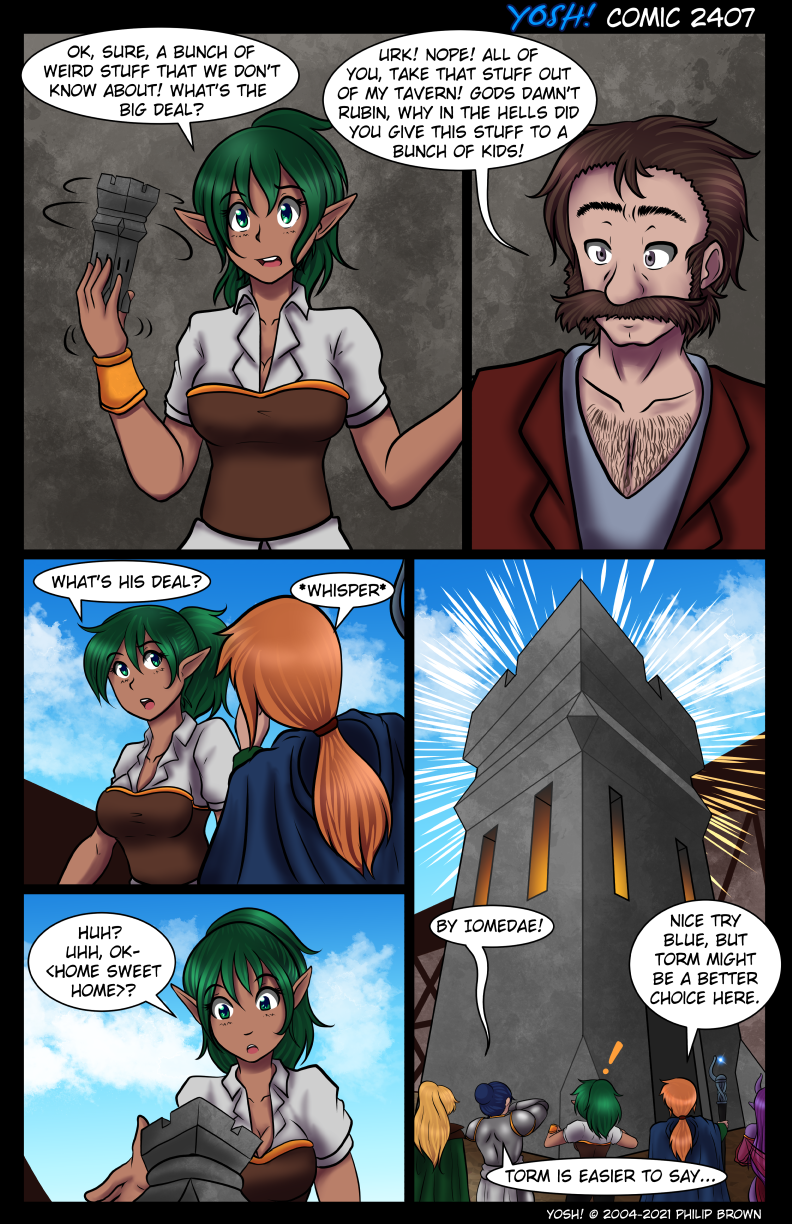 Tadah! Don’t use it indoors! Probably shouldn’t put it on the street either.

Most definitely shouldn’t be putting that on the street. Or ANYWHERE there isn’t prepared foundation. Not unless your plan is to find out what will happen first. It collapsing, or falling over, as the ground under it collapses, THEN collapsing. And no. The ‘foundation’ of a street isn’t remotely enough.
Pisa is when you don’t have enough foundation. This is coming down MUCH more rapidly. If the game was bothering a damn with physics at any rate.

Well, Instant Fortress’s description specifically says it’s magic prevents it from being tipped over, not sure if this would prevent it from FALLING over, but it might

It’s also made of Adamantine, so it won’t collapse on itself

Worst case it falls over and crushes some people/buildings, and can still be recalled so they can run from the guards

Yeahhh. Cause something that dense wont just sink into the ground outta sight. Riiigggght.

And THUS a portable house was born!

You know that’s one of those items that’s surprisingly well known but if I had to bet most players never actually had access to, mostly because it’s oddly situational and most parties I was in had a wizard with access to less obvious means of shelter.

Also glad to see that Rubin apparently told his friend just what each thing did when he left them in his care. Much better way to prevent accidents than just saying “don’t touch these” and then leaving curiosity to make a fool of everyone.

I still feel like I’m missing something in regards to the tavern/inn owner.

He’s a relatively famous character in the fictional city they are sorta in… It should be pretty obvious where they are for any D&D Nerds and finding out who he is is just a matter of knowing some lore about a Tavern with a well inside of it that seems to be always tired and open… “ALWAYS TIRED” and “OPEN”. It’s like a D&D riddle! 😛

Pleased I guessed right on that item. Pretty confidant were Ring Gates to the upper left of the previous page. The other items I’m distinctly less certain about.

Ring Gates, Instrument of WInd*, Demicupboard Key*, Instant Fortress, Decanter of Endless Water, Bag of Feasting* (Similar to a Bag of Bounty from the Eberron Campaign setting), Alchemy Jug, A box of assorted Magical rings, A Sash of Sune*, and an artificers Amulet*.
*Homebrew or modified item

The Instrument of Wind is a magical jewel that can conjure magical instruments and bestow the user with the ability to play them as well as create illusionary accompaniment to that music. It also functions as a magical bards focus. Besides the “magical bard instruments” there really arent a lot bard related items so I made this as a goal item a while back for Bards.

The Demicupboard Key is the workaround for having more than one extradimensional space item inside another space. The key unlocks a tiny demiplane that looks like a 5 foot tall cupboard where you can store stuff. Since it’s a demi plane you can put bags of holding, portable holes, Handy Haversacks etc in here without the nasty side effects of blowing a hole into the astral plane!

Bag of Feasting Make Food. If you are proficient with Chefs Tools you make better food.

Sash of Sune – The Holy Avenger equivalent for hedonistic sexy clerics and paladins of the goddess of love. Her preferred weapon is a whip- which is actually her Sash. So it functions as a magical whip with some special attributes. Sune is obviously one of my favorite Deities in D&D because she’s also the goddess that promotes the arts to add beauty to the word. Every artist has to love the goddess that decrees all her followers should commission artists 😛

The Artificers Amulet – DnD5e says you probably shouldn’t mess with the number of items people can attune to. Such rules are meant to be broken though. The Amulet grants a single extra attunement slot and allows for a limited number of quick swapping to different items per day. You know- for when you unattune to your ring of spell storing so you can use the crystal ball – only for your friend to fall off the airship and the ring has feather fall. You use the feature of the amulet to immediately reattune to your ring so you can save your friend from falling to their death! Or if you have a non-combat loadout of magic items and you get into a fight- you just expend all your charges from the amulet and now you’re re-attuned to all your battle equipment. Honestly – it’s pretty niche, but some of the best magical items are ones you’d think you would never use- until that very strange thing happens and you go’ “I HAVE AN IDEA!”

Sounds like an awesome set of items. Powerful and handy in their own way, but not likely to break or derail a plot unless the players get creative. Which of course they will, but that’s not the fault of the items.

Just noticed something amusing. Blue would be the one you’d most expect to be wearing the barely there outfit, like Kate is wearing. But she’s the one wearing the most body concealing armor of the group!

Funny you mention that-

Well, you did do a couple comics talking about Kate’s fashion sense for the game. Then in comes Blue, wearing full plate.

But, I’ve actually seen that in tabletop games. Where people play their polar opposites in ways. So the idea of her going full heavy armor isn’t that odd. Just something that I found amusing. Though your comment now has me going “oh lord, what are we in for?”