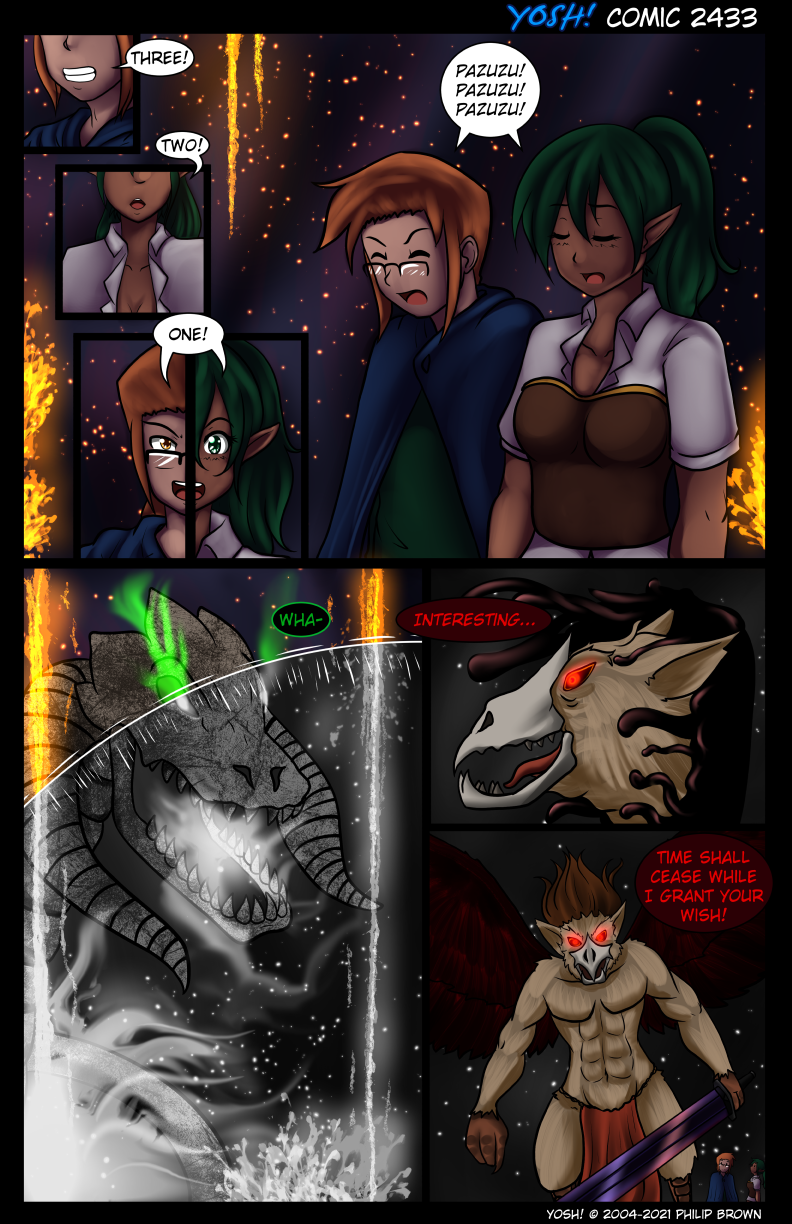 Oh yeah, now we get into the truly ridiculousness. Also! Streaming tonight at 9pm EDT over at Picarto.tv/SageSaga!

King of the demons of the wind………nice.

The truly ridiculousness would be Shiden playing Pazuzu.

Are we certain he’s not

PAZUZU! GRANT ME MY WISH!
A Candle of Invocation please!

Dracolich did like one attack that was accounted for by the plan, banish got lampshaded, everything else has been ineffective vs the group while they melt it’s defenses and destroy it’s home. Now we have a king of demons summoned and doing as asked while time stopping the dracolich. Where exactly is the danger here? What was that some comics back about a dragged out fight against an undead dragon that should be highly problematic?

I don’t know if you missed the point. The plan was packed with countermeasures from start to finish. Everything the dragon could do was considered and a solution was made. Everyone’s roles were perfected to negate its strengths. Even yelling out their plans was part of the plan. Michelle overacting about Phil to make the dragon more confident. Still, they had limited resources so a dragged out fight hurts them. That’s why they have rushed everything. They first stripped him of his legendary saves with the lie that they needed to polymorph him to win. The Iron flask elemental was an accident that almost ruined the plan but the dragon saved the day and let them continue to break the game with meta knowledge. This fight was not long… It’s incredibly short. A round in dnd is only 6 seconds. That means less than a minute has past. The fight is still going too. Now, this being the last part of the fool proof plan that the fool almost ruined, it’s pretty likely that the heroes are going to win… But did you really expect something else? Have you played dungeons and dragons? Sometimes you take on a near impossible combat… And you just wreck it. The dm drops a giant demon with a crown of fire and then someone casts a spell that turns him so dumb he can’t count anymore and then the paladin banishes him and he needs to roll an 18+ or be gone for good… But he has a – 5 to the d20 roll… So it’s impossible… And the deadly final boss is stupifed and sent back to the abyss… In 6 seconds.

But they are playing against an AI that can manipulate their “real life” selves, which came to their surprises. Isn’t it reckless to expose the null to any risk of being dominated by the chaotic evil part of the AI?

That is a gross misinterpretation of what the AI’s are capable of. There are safety systems in place to prevent any permanent affects. There’s nothing in the virtual world that can affect them outside of the virtual world, and the AIs are leashed AIs- the Android girls are far superior AIs. If Michelle or Nami wanted to they could just 100% cheat this and just hack the roll system.

“But did you really expect something else? Have you played dungeons and dragons? Sometimes you take on a near impossible combat… And you just wreck it. ”
Yes actually I did expect something else. At least when things happen in standard D&D you have have several sessions building up to becoming op. Everyone got dumped in with meta knowledge, was given op items in minimal time and then got to keikaku doori through it all. It’s rather boring. The fact they can cheat at anytime while already pretty much cheating doesn’t change the fact that there’s nothing really interesting going on here. It’s akin to watching kids playing make believe (yes I realize the irony) and just saying “haha you die I win” and that’s it.
Phil helped write the wiki for the world so he knows where and how to easily get all the op stuff to abuse since he basically put it there in some cases. There’s no sense of acomplishment here when nothing was earned.

So you do get it, but that was explained that that was the plan at the very beginning. They took on a quest that would be impossible to win without meta gaming at their level- and they gave Phil permission to meta game the crap out of it. Then- they did just that. So you knew that was what they were doing, you knew they were meta gaming, you knew that they spent time collecting particular items- but you expected something else? I don’t understand what you were expecting. You were told, according to this you understood, but when it happened you’re upset or unhappy with it? That’s fine- I’m sorry you don’t like it, this part of the story is almost done. So hopefully what comes next will be more to your liking.

My point is, they obviously aren’t going to keep playing the game like this. Like you seem to be saying, no challenge, no fun. While you can have some fun being “god like” in a game, and I feel VR is one of those places where you can do that well, it does get old and boring. So the idea would be to make this the end of their old- and start up something new, now that they have fixed things and get rid of metagaming, and they can play as characters, instead of being seen as gods.