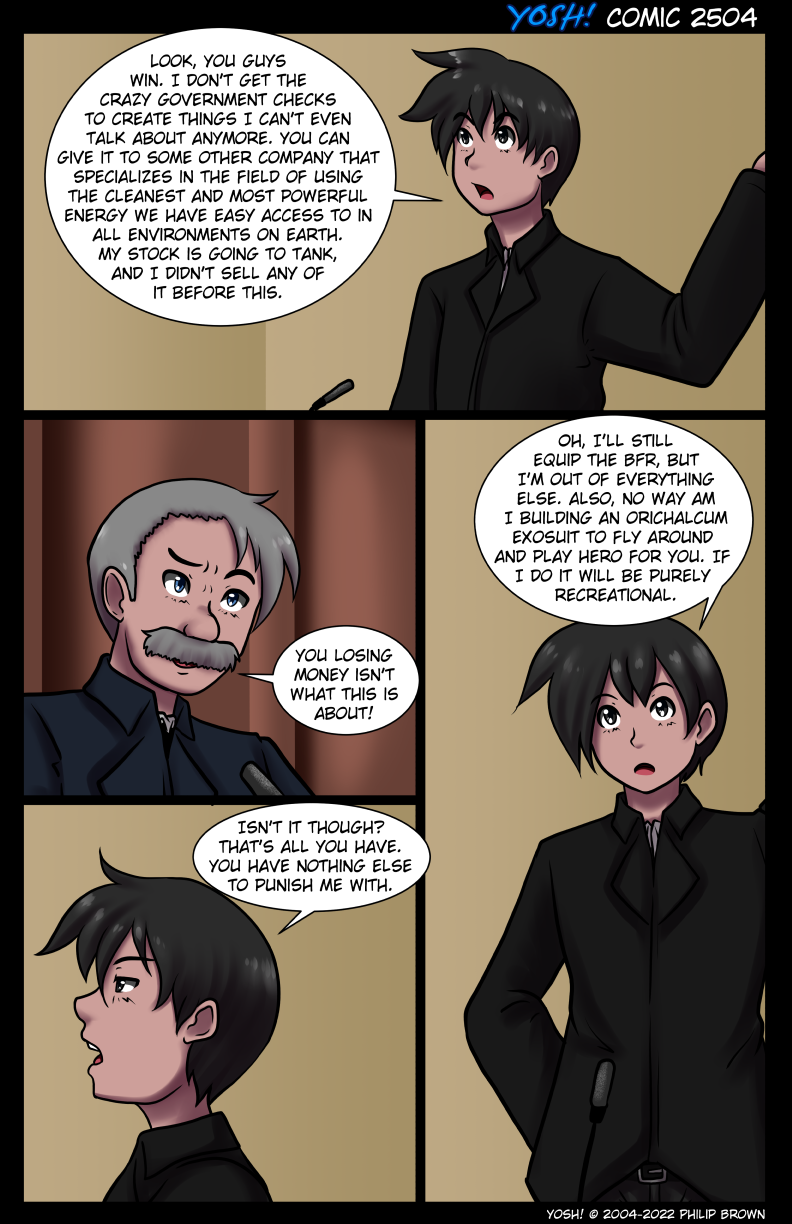 4th wall break or is this an Earth that is the same as here (but with magic)?

The comic has at many points mentioned comic books and movies from normal Earth so I hope everyone has figured out this is an alternate earth story… If not- yes! It is an alternate Earth story!

What is an “BFR”!? Top hit conventional was “Blood Flow Restriction”, slang was “Big Fat Retard”. So is it using the latter for comic innuendo?

I would guess Big Fucking Railgun.

He is referring to the “Black Forest Rangers”. The people Phil is allowed to play with.

if he doesn’t personally, i’m pretty sure a few of the androids would be interested in some ironman fun. Well, not as governement lapdogs obviously

I’m pretty sure he was sarcastic when he said to give the checks to “some other company that specialise [in using orichalcum], but the senator apparently think there ARE other companies with such ability ?

Since the feed isn’t actually cut, all the thing’s he’s alluding to also practically guarantee that his stock will not, in fact, tank. He just casually mentioned the fact that his company is a bleeding edge tech company that specializes in impossibly clean energy, and the senator indirectly – but heavily – alluded to its output as capable of destroying a floating island.

The game is practically up that this was intended to be a kangaroo court intended to discredit and scapegoat Shiden, with an unspoken implication that the purpose behind it was to create a pretense that would allow the government to further monopolize – if not take a controlling interest – in the company…probably for the weapons R&D they both just alluded to. And Shiden’s response was “You know what? I’ve done the math and you need me more than I need you, so I’m terminating our contract”.

Yeah, the bottom line for the next quarter or even year are probably going to take a hit, but after this kind of publicity, everyone’s going to be looking into the company. Dude’s probably going to get offers from every tech company, military complex and government on the planet after this.

He also mentions the BFR, the Black Forest Rangers. I doubt too many of the normal people know what this abbreviation means. But everyone who does know will be surely like “The BFR trusts this guy to equip them? His tech and trustworthiness must be first class!”