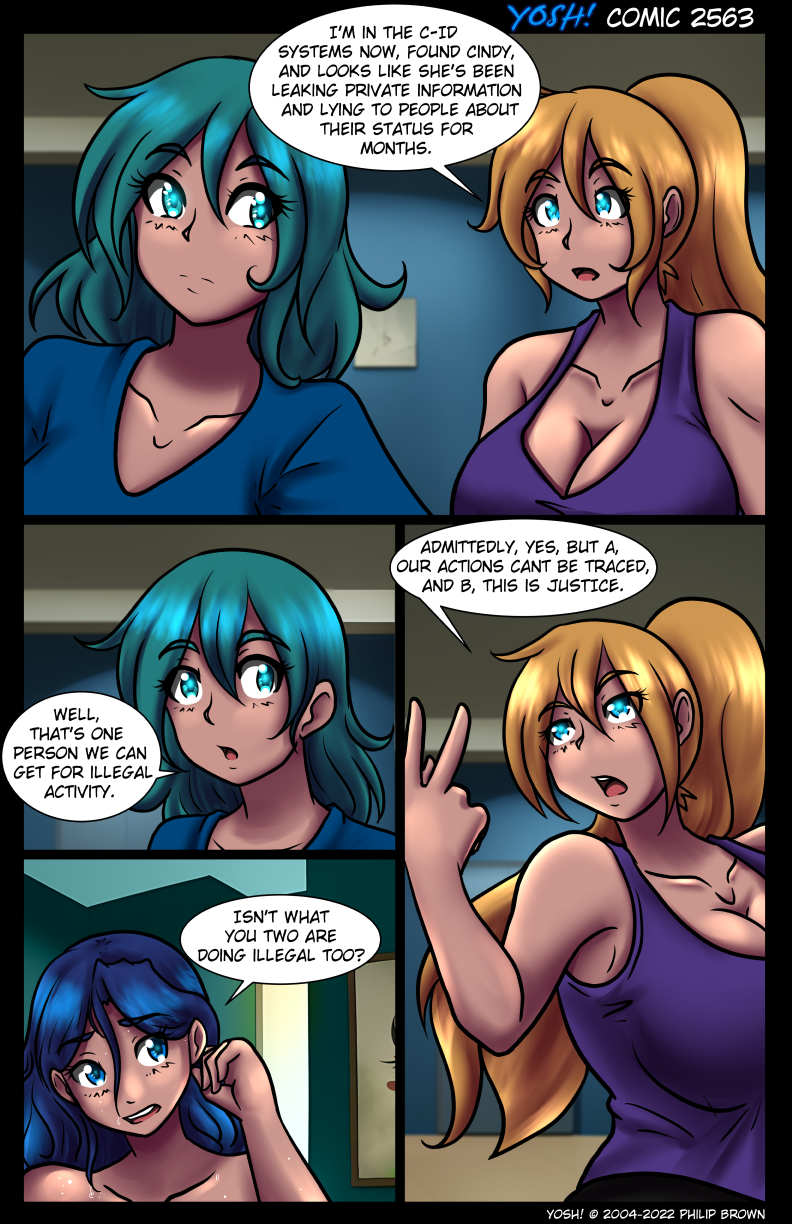 Android girls learn about cyber vigilantism. To be fair, Nami is already a known specialist in cyber warfare, Michelle is too though not as much as Nami. Their methods of interacting with other computer systems is akin to a person from a higher dimension observing and manipulating something on a lower dimension. If you aren’t familiar with that example let me geek out for a moment to give the most basic example of this. Let’s say there is a 2D universe that lives on a sheet of paper. Because they are 2D they cant ever actually look out into the world, they can only know their 2 dimensions. A person or being in 3D might be able to put a pencil on that paper and add things to their world. These things can’t see what’s doing it, they just can tell something is happening, and just as quickly an eraser can be brought down and remove it. The 2D thing might be able to imagine a 3rd Dimension, where this stuff came from, but it can never know. O_O

Looks like I gave Cindy too much benefit of the doubt and she really is in with the cult. Take her down girls!

Perhaps or she may be simply getting paid off. Taking bribes for access to information is an all too common form of corruption, especially with government.

Thanks for another chapter, Sage!

Was this in response to the legal talk we got in comments previous comic? 😛

I don’t know how many pages ahead Sage plans, but if they’re anything like my writing, I work on a buffer of about 10 chapters of planned story in advance.

For Artificial Incident I plan things out a long time, and script things out months in advance. Every page of the current arc is already written and then some. For Yosh! I don’t adhere to a strict script. I leave it open in case I want to do something or address something. This was not in response to, It was planned, but I did make sure to include a little bit more detail in so people in the comments would get the nod to their hard work in looking up very specific laws – that is completely unnecessary XD- Still I love it. Thank you all.

There is of course the infamous “Pin” trap for higher dimensional beings. 🙂 Imagine sticking your finger down through the 2D plane and then the 2D-denizens stick a 2D pin through your finger. You become trapped. Not saying that should happen here, just saying that it’s important to remain respectful of lower dimensional entities!

On dimensionality, in theory theory and practice are the same but in practice they are different. You’ll likely know this, but physical space can only be 3D. (Perhaps because it is the only dimensionality of space that can have bo … balls with content that stay put or in other words cells.)

[Yes, I got distracted by the portrayal. Who wouldn’t!?]

I like Michelle justice pose and face in this

Bad day to be an InfoSec flatlander.

It was bad enough, but now the cyber-goddesses can also draw magic circles remotely. And can probably do it in physical memory modules, instead of needing lasers.