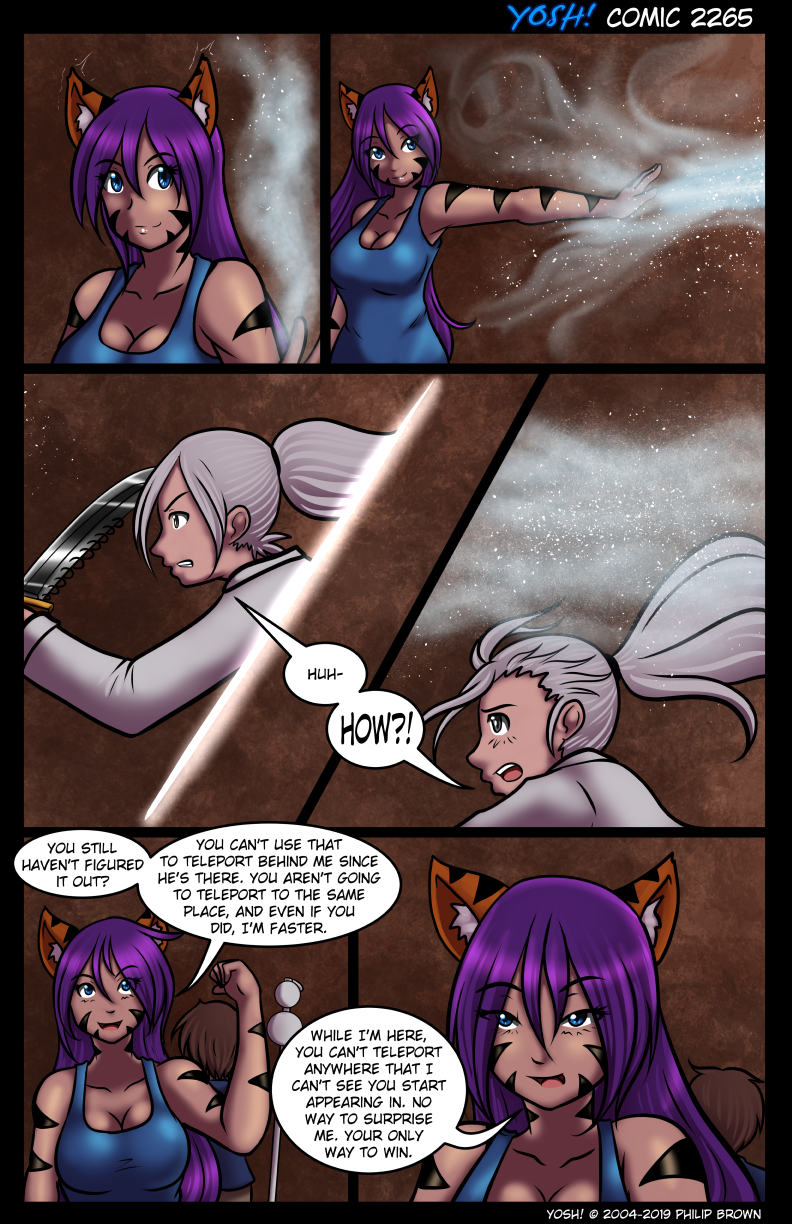 Kick him in the ego.

“You’re only way to win.” Should that be Your?

Yep! Got it! Thanks!

Is it me or do life and death seem to be more inexperienced than they let on? I mean sure they can command an army of monsters or lead groups of other magi but they dont really have experience in direct combat, how old are they suppose to be again?

Their powers have set them above most regular mages and people. Death has instant-kill attacks and we haven’t seen much of Life’s magic but that sword looks hard to stop if you haven’t figured out the trick. They’re probably used to have everyone cower before them, delegate fighting to other mages and creatures, and when they do have to get up to finish it quickly.

This. Especially the part about death literally being able to just kill anything that threatens them. They probably haven’t had to do any fighting practically against anyone other than Null, which explains that Life has *one trick* up his sleeve meant to instantly end fights as well. Because honestly sudden teleport and cutting throat IS a viable option when your opponent can’t have magical defenses… Which is why Phill being unable to be cut is kind of making that trick pointless. But we do see that it’s a move designed to kill Null by surprise, not to fight him. Even then Life didn’t need to learn that much fighting or tactics.

Sorry to do this to ya Sage, but… last panel should be “your only way to win.”

Damn Kate is confident. I have no idea how this is going to go, good job on keeping me hooked!

I think I would take a bigger hit to my ego, if the person countering me, with the excellent point, audibly mispelt/used the wrong word when they did it.

Yep I already fixed it. Thanks!

She’s bluffing, letting him think she’s relying on her vision. Prob so he doesnt try to cut her ears off.

That is a nice bluff yeah. I’m thinking the ‘cut through space’ thing he uses to teleport creates a sound on a frequency humans can’t hear, which is why he never figured out before his trick has such a tell.

Kate you’re monologuing, don’t tell the evil mage your trick until just before they take their last breath.

Could be Monologuing. Could also be, “This is what you get for using that tired old ‘Damsel in Distress’ troupe on me.” Lesson. 🙂

Who said she’s telling the whole truth. Fake monologuing is a great way to further throw off an already off foot enemy. Especially if you can lead them into a logic trap that makes their next action even more predictable.

Indeed.
Confusion is one of the greatest weapons in a fight. If your opponent starts to hesitate on practically everything they do, you’ll have hundreds or thousands of openings to end the fight.
Like if he starts being overly conscious “where should I teleport next?!” and take even a second longer, Kate has more than ample time to for example freeze his legs to the floor, probably making it a lot harder to move around.

Based oner her ear twiching she is likely lying to him, so not tipping her hand. Also pretty sure the plan isn’t to win but to buy time. Stalling with talking is less dangerous then stalling with fighting.

Man, that guy is so easy to bait

I wonder if this is when Axel pops back up going, “We ain’t done, Silvie-locks!” or something to that effect. 😀

Love Kate’s expression in the last panel, she’s trolling him real good! She’s got him stalemated for the moment so long as she has Phil at her back. Hoping Life & Death don’t pull something like a trap door to seperate them.

when cats play with their sentient food.

Hmmm, no thumbs up button but yeah that deserves one!

The part that gets to me is that he is falling for this. We all know she is bluffing about how secure her position is. But he is eating this all up.

Literally no one other than the null has ever been able to even challenge them, have they? They have never had to actually think about a fight in their lives before or after they got curb stomped by the null.

Heck… the previous null didn’t even have the sheer invulnerability we are seeing now. Technically speaking, he should have been relatively easy to beat if he didn’t manage to get a good weapon (such as the staff)- just one guy with a weapon against the heads of an entire civilization. But they were so bad at actually having to think about fights that they never actually fixed their problems.

This was something that always bugged me. Not in a “This is bad writing way” but in a “Wow these villains are overconfident” Kind of way. They ruled the world. The entire planet. All of it. The previous Null was not immune to physical damage. If they were smart they would have just swarmed him in mercenaries or sniped him with some paid assassins. (He can’t employ magical defenses, a single arrow is all it would take) But they didn’t. They probably didn’t even pay him any heed until all of a sudden he’d gone from a annoyance that breaks their stuff sometimes to the leader of a Revolution with powerful backup. Now he was a threat. And they probably responded to it the same way they always had. With a direct fight. And they lost. And lost hard. Now so many years later Life has gotten exactly one (1) trick to fight against someone who has anti-magic defenses. One which doesn’t even work because he didn’t consider that maybe things had changed in the past few millennia.

Is it just me, or is she even sexier than usual right now?