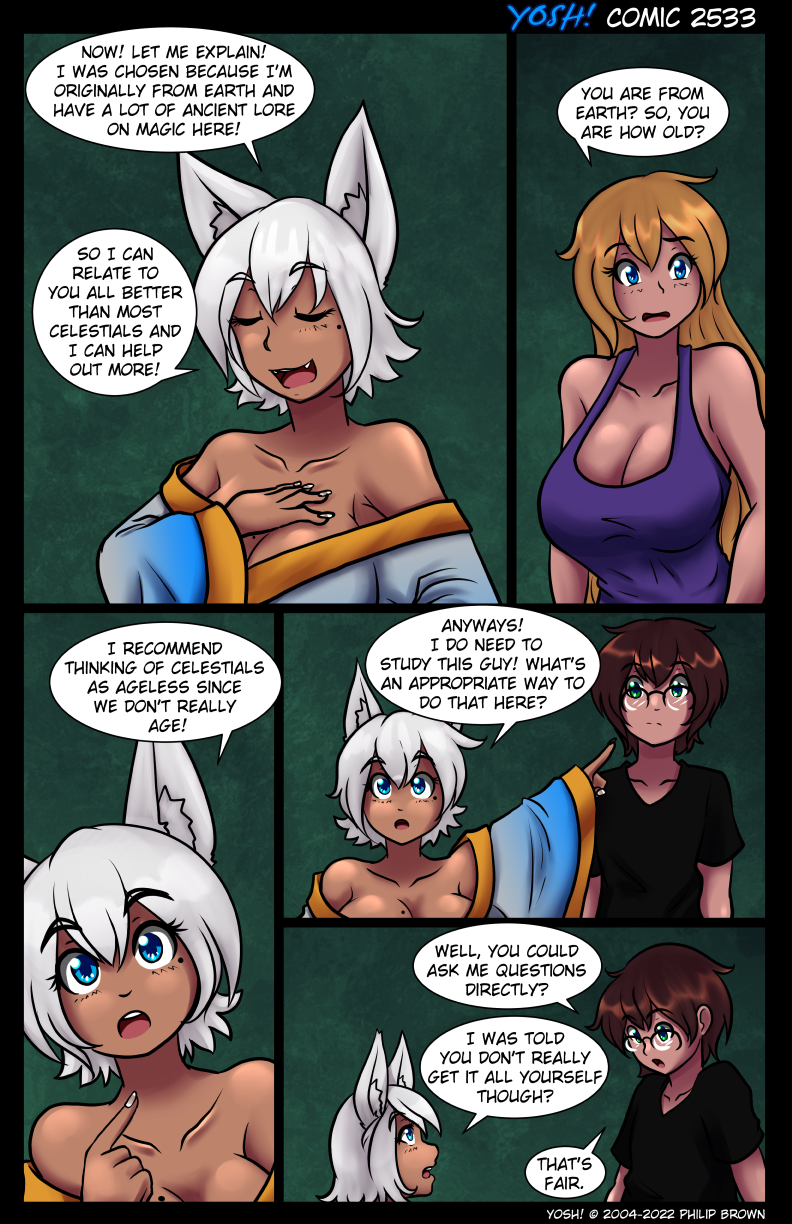 Yuki has “pointy” fingers too….

Time to introduce the Fox to the Penguin.

But yeah actually fair. Penpen likely knows more than most about how Phil’s Null powers work.

“For starters, lemme sit on someone’s knees so we’re at a more similar height”

Originally from Earth, has Chimera features or some sort of analogous resemblance which implies she is from before magic was sealed… and I get the feeling her comment of “I recommend you think of Celestials as ageless!” is really implying “I like presenting myself as being young and don’t like thinking about how insanely old I actually am and I really would rather you not bring it up!”

My bets are on her being quite a bit older than Kalahan, at the very least. But, it IS rude to ask a girl her age!

I mean, she’s a nine-tailed fox. A tenko. Powerful enough to be considered a god. I think calling her ageless is much less hazardous to one’s health and sanity than her telling you how mind-bogglingly old she really is. I wonder if she has those cool kitsune powers, like pocket dimensions and stuff?

More than that, it is ageist. It’s like remarking to their face on other’s sexual preferences or height or boobness – what has that to do with anything!? For sure, growing up or growing old can be liberating respectively constricting, but it has nothing to do with what people do with themselves. And that’s not for others to say, anyway (sez I 🙄).

A fascinating topic to dissect.

On further thought, I cannot possibly agree that Yuki having travelled around the Earth’s sun the same number of times means she’s not any older. Presumably, time still passes in the Celestial plane at least somewhat analogous to how it passes on Earth; you might have plans to the contrary there, but I’ve seen no such hints up to now within the comic. In fact, if I recall correctly, Kalahan mentions, when first meeting Phil, of it having been a very long time since he was needed in his capacity as a liaison to mortal beings. Therefore, it stands to reason that time still passes on the Celestial realm in a way that would be understandable to a human mind; memories are still formed, experiences still accumulate, and aging still occurs, even if only mentally. Yuki, here, should therefore be much older than she outwardly appears, even if she experienced most of her life on another plane where the same rules of reality don’t quite apply.

… Besides, setting aside the genuinely intriguing ramifications of the passage of time being different in different planes of existence as well as the rudeness of so bluntly asking a gal her age- she’s probably totally immortal with all that magic up in her business, anyway, so, honestly, how old she is isn’t even an important topic in the first place!

it says orignally instead of originally

wow still acknowledging that no one still knows the proper in depth explainations on how all of Phil’s powers work huh?

Of course it wouldn’t hurt if she didn’t treat him as a thing and go asking other people and actually talk to him directly as a person instead. That’s a bit rude after all.

It is considered rude in many cultures to point. But she is not up to speed on Earth’s current customs, she needs to learn those too. Still, better pointy fingers than pointy-head foul mouth.

Well that’s one way to dodge the question about her age.

Wait, are they just going to skip over Phil calling her a Short Stack?